The Faraday Institution’s SOLBAT project has made a significant step in understanding how and why solid-state batteries (SSBs) fail. The research points to strategies that cell manufacturers might use to avoid such failures, potentially accelerating the commercialisation of SSBs.

To significantly improve electric vehicle (EV) battery range and safety at a lower cost, new battery chemistries that are “beyond lithium ion” must be developed. SSBs are one such promising technology, but mass market adoption has been held back by several key technical challenges that cause the battery to fail when charged and discharged.

SSBs can short circuit after repeating charging and discharging. Two well-recognised causes of battery failure are the growth of dendrites, branching networks of lithium that grow through the solid electrolyte during charging of a battery, and void creation, pores that reduce the area of contact between the electrolyte and negative electrode. Solving these two challenges could potentially usher in a new era of SSB-powered EVs.

Researchers in the Materials, Chemistry and Engineering Science Departments at the University of Oxford, collaborating with Diamond Light Source and the Paul Scherrer Institut in Switzerland have generated strong evidence supporting one of two competing theories regarding the mechanism by which lithium metal dendrites grow through ceramic electrolytes leading to short circulates at high rates of charge. The significant paper, published in Nature Materials, provides answers to one important piece of the scientific puzzle.

Researchers used an imaging technique similar to that used in medical CAT scanners – X-ray computed tomography – coupled with spatially mapped X-ray diffraction, to visualise and characterise the growth of cracks and dendrites deep within an operating solid-state battery.

Conical pothole-like cracks first form in the electrolyte adjacent to the plated lithium anode. The crack propagates along a path where the porosity is above the average value of the ceramic. Metallic lithium is then deposited along the crack and this ingress drives the propagation of the cracks by widening the crack from the rear. The crack front propagates ahead of the lithium deposition, and lithium is not present at the crack tip. Only later, when lithium plates along the entire crack, does the cell finally short circuit.

The research affirms the need for the development of ceramic electrolytes with increased rigidity.

In situ phase-contrast X-ray computed tomography virtual cross-sections during a single plating of a Li/Li6PS5Cl/Li cell (at various charges passed) and analysis of lithium deposition in the cracks showing that cracks propagate ahead of Li. Plated electrode at the top of the image.

The April 2021 paper is a follow up to an earlier paper written by the Faraday Institution’s SOLBAT team also published in Nature Materials in October 2019. The earlier research details the mechanistic relationship discovered between dendrite growth and void formation, which brings the commercial viability of SSBs in electric vehicles a big step closer. Using a combination of cutting edge electrochemical and imaging techniques, the researchers revealed that voids are created when a “critical current density”– that is, the amount of charge per a unit of time – is exceeded. This in turn leads to dendrite growth and ultimately total cell failure. 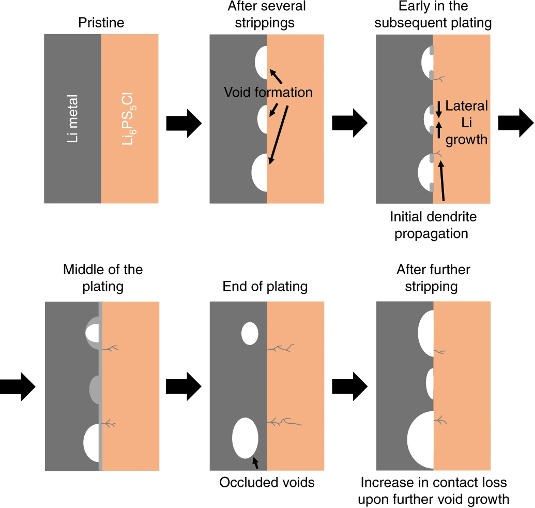 This new mechanistic understanding can inform approaches to avoid such cell failures including using physical properties of the battery as “levers” to keep voids and dendrites from forming. With this understanding, the time by which SSBs would appear in commercial vehicles can be accelerated.

A recent Faraday Insight predicts that SSBs may satisfy 50% of global demand for batteries in consumer electronics, 30% in transportation and over 10% in aircraft by 2040.

It is key to break down the scientific barriers that prevent the progression to market of technologies that will enable our vision of the future of mobility. The study by Oxford researchers is one early example of a scientific advance that the Faraday Institution was set up to drive.”