Lithium-sulfur technology has the potential to offer cheaper, lighter-weight batteries that also offer safety advantages. After initially finding use in niche markets such as satellites, drones and military vehicles, the technology has the potential to transform aviation in the long-term. Electric aircraft offering short-range flights or vertical take-off and landing (including personalised aviation and flying taxis in cities) are distinct possibilities by 2050. The UK, which is already home to established lithium-sulfur battery manufacturers and to leading academics in the field, has a great opportunity to be the global leader in this ground-breaking technology. 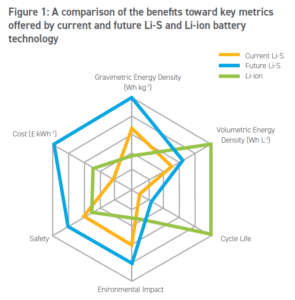 Batteries that extend performance beyond the fundamental limits of lithium-ion (Li-ion) technology are essential for the transition away from fossil fuels. Amongst the most mature of these ‘beyond Li-ion’ technologies are lithium-sulfur (Li-S) batteries. Li-S cells replace the metal rich cathode of Li-ion cells with comparatively cheap and abundant elemental sulfur, a material that also offers the theoretical potential for a five-fold improvement in capacity[1] for the same weight compared with materials widely used in Li-ion cells. By using sulfur, lightweight cells can be produced using more cost-effective materials, while also reducing the environmental and social concerns surrounding the production of nickel and cobalt. A comparison of some of these key metrics can be seen in Figure 1.

In contrast to some other battery types, such as Li-ion and Na-ion batteries, which employ an intercalation mechanism,[2] in which Li-ions are shuttled between electrodes where they are stored, Li-S batteries operate by a ‘conversion mechanism’. In this process, elemental sulfur and lithium react to form a series of lithium-containing sulfur compounds, known as polysulfides, to deliver the energy stored in the cell. This mechanism of operation improves the gravimetric energy density (the energy stored for a given weight[3]) of the device compared to the current generation of batteries by enabling the use of lithium metal, the lightest solid element, at the anode.

Historically, the majority of Li-S research has focussed on developing new materials to improve the sulfur cathode. However, in recent years there has been a recognition that developments are needed across the cell to improve the performance of Li-S batteries and offer a viable alternative to the widespread Li-ion cell. 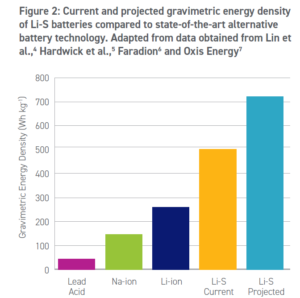 The most significant advantage that Li-S batteries offer over competitor battery technologies is their substantially higher energy density per unit weight.[4,5,6] Li-S cells have a theoretical energy density of 2,700 Wh kg-1. While this is reduced when deployed in a cell, the technology has been demonstrated at 470 Wh kg-1 in a technologically relevant cell format.[7] Further improvements in the design of materials and cells are expected to increase this to in excess of 500 Wh kg-1 by early 2021. Figure 2 compares the energy density of Li-S batteries to alternative battery technologies. By moving beyond the limits of Li-ion batteries, Li-S cells will expand the range of applications in which electrification is currently possible, including into aviation and large vehicles.

Reducing the cost of batteries is amongst the biggest challenges facing manufacturers. Much of the cost of current batteries is due to the expense of metals including nickel and cobalt.[8] In contrast, the materials used in the electrodes of Li-S cells are comparatively low cost, with sulfur being amongst the most abundant element on earth. The benefits of economies of scale for Li-S cells will be realised upon wider commercialisation, in particular in the production of the electrolyte. Forecasts suggest this may lead to Li-S cells with comparable performance to Li-ion cells, but at less than half the price.[9] The removal of transition metals such as cobalt from batteries is also an important consideration due to environmental and ethical concerns with mining and uncertainties around security of supply.[10]

Lithium-sulfur cells offer significant safety benefits over other battery types due to their operating mechanism. The ‘conversion reaction’, which forms new materials during charge and discharge, eliminates the need to host Li-ions in materials, and reduces the risk of catastrophic failure of batteries. Alongside this, the highly reactive Li anode is passivated with sulfide materials during operation, which further reduces the risk of a dangerous failure. While thermal runaway remains a possibility in Li-S cells, research has shown that the magnitude of this failure is significantly lower than Li-ion cells.[11] Li-S technology that employs a protective solid-state layer at the anode will also mitigate the risk of short-circuiting of cells. The conversion mechanism also enables Li-S cells to be stored safely for extended durations and shipped in a fully discharged state, which enables transportation via air freight as the cell is not unstable at low discharge states unlike Li-ion batteries. These inherent safety benefits will greatly aid the rapid uptake of Li-S cells and reduce the burden required for external safety components in a battery pack.

As battery technology is deployed more widely the environmental impact of the cells, and their constituent materials, is becoming an increasing concern. As highlighted previously, Li-ion batteries typically contain both nickel and cobalt; materials which, at present, are obtained through intensive mining efforts. Alongside this, there are significant social concerns, in particular regarding cobalt supply chains, the vast majority of which is obtained from mines in the Democratic Republic of Congo as detailed by a recent Faraday Insight.[10] These metals can have a significant contaminating effect on water supplies, and subsequently wildlife and food supplies.[12] In contrast, sulfur is so abundant that the US Geographical Survey has described it as ‘almost limitless’ and is geographically disperse with significant production capacity across all continents.[13] In addition, environmental agencies do not consider sulfur to pose any major health risks.

1 Capacity relates to the total energy stored by a battery. This has a key role in determining how long a battery will operate for during a single discharge.

2 Intercalation refers to the process in which ions are stored between the layers of graphite in the anode. This process enables the battery to deliver the electricity stored in the cell.