Building closer links between industry and academia will be vital as Britain seeks to grow its battery workforce. Chemical engineer Victoria Liddle knows this better than most after spending a year as a Faraday Institution Industrial Fellow identifying the skills the next generation will need for success.

After completing her Masters in Chemical Engineering, Victoria spent 12 months as a Faraday Institution Industrial Fellow at Envision AESC, which announced last year it would build a second gigafactory in Sunderland, Tyne and Wear. Currently Envision AESC makes batteries for Nissan’s LEAF electric vehicles (EVs) at the UK’s only gigafactory currently in operation.

On completion of her Masters, Victoria became a permanent employee at Envision AESC as the engineer responsible for the ‘C line’ for module manufacturing. In that role, she monitors how the production line is performing and implements improvements for it to run more efficiently, for example, reducing cycle time to increase throughput or improving the process to reduce scrap. 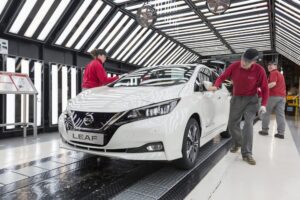 Nissan LEAF on the production line at the Nissan Sunderland plant

During the fellowship she was able to observe the company’s processes and report back to academic partner, Newcastle University, on content to be included to best prepare students for a career in the battery industry. This feedback has been taken into consideration within the National Electrification Skills Framework and Forum, and will feature in any new courses developed.

Interviews and feedback from Victoria highlighted the point that people are generally hired for their skill in a specific aspect of a process to produce sub-components to a final product. This often means a whole system awareness is missed, as is how the battery interfaces with external systems.

Because this knowledge is sometimes not available within a manufacturing unit it must be currently obtained from personal endeavour. This feedback from Victoria has been taken into consideration within the National Skills Framework, and will feature in any new courses developed. 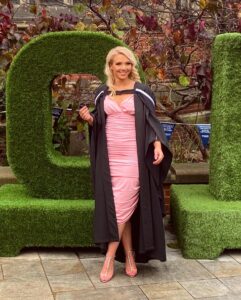 Having enjoyed an association with Envision AESC dating back to a work experience placement she undertook while still in school, Victoria’s knowledge of the company was already extensive, but she says the Industrial Fellowship really opened her eyes to all the different aspects of the business.

“I was placed in the customer engineering team, but was able to float around the company learning about the different departments without getting dragged too much into the day-to-day work,” she says. “So, I got to work with customers on new design projects and with the R&D teams in Japan. I got involved with the sales team and warehousing, and it gave me a really good all-round view of the company.”

All these roles are likely to be in high demand in the coming years as the UK battery industry expands. Two new gigafactories are being built in the North-East, by Envision AESC and Britishvolt, to cater for increasing demand for batteries for EVs. The Faraday Institution’s latest gigafactory study predicts that the UK workforce in the automotive and EV battery ecosystem will grow 29% by 2040, with 78,000 new jobs set to be created in gigafactories themselves and their supply chains.

The surge in demand for batteries comes at a time when the government’s levelling up agenda is seeking to ensure high value jobs are more evenly spread around the country, and for places like the North-East this means teaching the right skills in universities is more vital than ever. “Traditionally universities have expected chemical engineering students to go into industries like oil and gas or pharmaceuticals, and a lot of the work placements available reflect that,” Victoria says. “But the battery industry is booming and there’s a huge demand for engineers.”

“The premise behind my Industrial Fellowship was to work closely with Newcastle University and give them ideas about what they should teach their students to help them get to where I am. It was a great experience, and I was lucky to have a company like Envision AESC on my doorstep to partner with.”

The fellowship has led to a closer working relationship between Envision AESC and the university, and they are currently collaborating on a research project looking at battery safety.

Victoria has been interested in engineering since school. “I was always into maths and science. I think a lot of my family thought I would become an accountant,” she says. “But I wanted to do something where I could apply my interest in science and make a difference, and this is such an exciting and important industry to work in.”

Growing the battery workforce also means making it more diverse, and Victoria says her experience as a woman in a male-dominated environment has been largely positive. She took part in the Empower mentorship programme delivered by the Faraday Institution and Skills4, which is designed to help women in STEM feel comfortable and confident in the workplace, and says the support of the Envision AESC team has also been invaluable.

“I was the only female engineer in the UK plant and was also younger than anyone else on the team when I started,” she says. “So, I know I didn’t fit the mould. But I’ve always had really supportive managers who have treated me fairly, which is so important.”

Indeed, Victoria says she would recommend a career in the battery industry to anyone. “I wouldn’t change it for the world,” she says. “I’ve just turned 25, so I’m early in my career, but I can already see that I’m in an industry that’s going places.

“We’re a team of 30 engineers keeping the first ever gigaplant running and playing a role in setting up a big new gigafactory, so it’s all hands-on deck. But when I come to work every day and I can see where we’re heading and how I fit into the puzzle, so it’s really exciting.”

Read more and get involved with the National Electrification Skills Framework and Forum that is identifying and enabling the delivery of the key skills needed to make the UK a world leader in the manufacture of battery technology, power electronics, motors and drives.

Anyone interested in a career at Envision AESC, can contact hrteam.uk@envision-aesc.com for more information and job vacancies.