Increasing battery lifetime and performance via changing battery design requires optimisation of many variables, from the chemistry of the electrodes to the dimensions and shape of the cells and how they are connected. Understanding how each choice affects the overall behaviour of the battery is challenging.

Historically industry has relied on a purely experimental approach. However physical prototyping is slow and costly, whereas industry and consumers are demanding rapid improvements in electric vehicle (EV) performance. Development can be accelerated using predictive computer simulations, but to be useful software must be fast enough, powerful enough and accurate enough to simulate realistic designs, so that prototypes can be tested in a virtual environment.

Models that describe accurately and reliably how a single battery cell discharges during use are complex and require advanced mathematical solvers. Computer models must simulate not just one cell but the electrical and thermal interactions between many cells as they are grouped into modules and battery packs. Previously, compromises had to be made to the fidelity and/or complexity of the model to allow even basic simulations to be performed. This undermined the usefulness of computer modelling as a tool for prototyping of battery designs.

The Faraday Institution’s Multi-scale Modelling team, including researchers at the Universities of Southampton, Portsmouth and Imperial College London, have removed the need to compromise on speed or accuracy of battery design modelling tools. They have developed a model, DandeLiion, that gives battery designers in academia and industry the capability to quickly and accurately simulate the electrochemical and thermal behaviour of commercial pouch cells. The code is currently being developed that will extend its capabilities to cylindrical cells. Soon, DandeLiion will be able to model battery modules and packs.

To do this DandeLiion has harnessed cutting edge numerical methods and techniques in scientific computation. Using only a standard desktop computer, it can predict pouch cell voltage and temperature faster than the equivalent experimental data can be collected in the lab during a battery discharge. DandeLiion outperforms current industry-standard tools by performing computations 100-1,000 times faster than its competitors. For more complex systems such as pouch cells, modules or packs, the gains can be even higher. The software is equipped with a chemistry library, allowing battery designers to test a range of commercially relevant configurations. Excellent agreement between DandeLiion and experimental data has been demonstrated – for example on a commercial pouch cell. 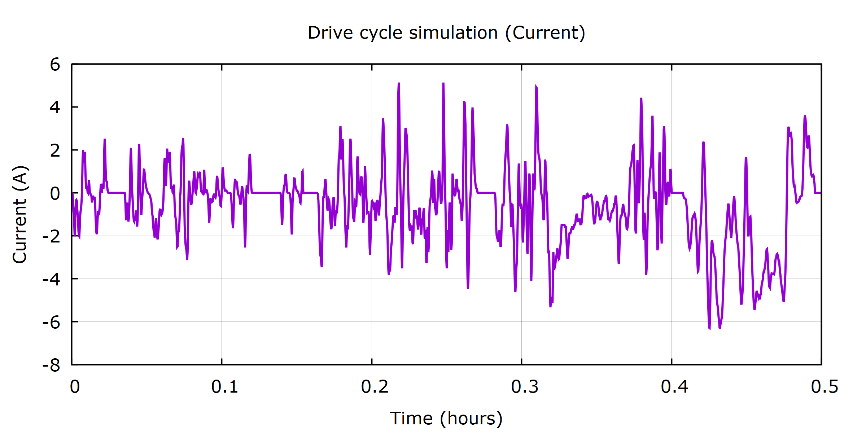 Current mimicking the drive cycle of an electric vehicle

Comparison between the resulting experimental voltage from a commercial pouch cell (black) and voltage predicted by DandeLiion (red) with error shown in yellow.

DandeLiion’s high-performance capabilities will arm industrial battery designers with a fast, reliable and powerful design tool to investigate the thermal and electrochemical response of battery prototypes. This avoids many of the costs and delays associated with the creation of numerous physical prototype devices with which to test novel combinations of materials and cell design. In essence it provides designers with a “digital twin”; a versatile tool that can be used in multiple ways, including in cell choice and pack design for bespoke use. Once the software has been modified to incorporate degradation mechanisms it will also provide a method of vastly improving the rapid predictions of battery lifetime. In turn this will enable the rapid development of higher performance, longer lasting, and safer batteries for use in EVs and other applications. Industry partners are already using the models to develop commercial battery systems.

DandeLiion is being developed as a commercial product. Next steps are to apply for a Faraday Institution Entrepreneurial Fellowship to develop the business case and a route to commercialisation.

Industry has long been asking for a digital twin of the lithium-ion battery – DandeLiion is our answer to this, the first model to give both the fidelity and speed required for designing the best performing battery pack”