By adapting the charging processes to the unique, evolving health of every battery, Breathe Battery Technologies is unlocking significant improvements to battery charge times, range and lifetime.

Because of physical and chemical processes that take place in batteries, the performance of an electric vehicle decreases from the day it is manufactured. This degradation lowers range, limits lifetime, and slows charging. To compensate for this, battery packs are often built with excess or more expensive cells, increasing the total cost. Moreover, battery degradation leads to a slight increase in risks of failure, particularly if the battery management system does not adapt to the changing health of the battery. 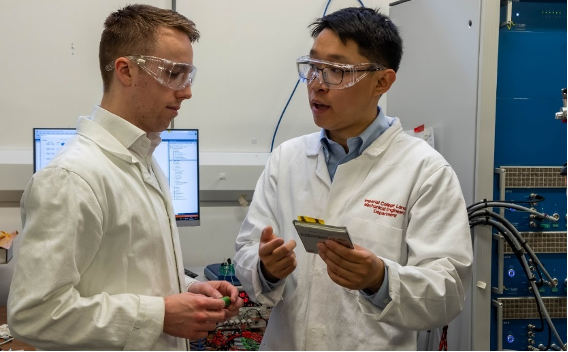 A Faraday Institution research team at Imperial College London recognised that mathematical models that adapt to this changing battery health and are simple enough to operate on today’s electric vehicle (EV) battery management system hardware could be a game changer. If such models were deployed, substantial increases in performance and safety could be obtained from today’s commercially-available cells.

The subsequent spin-out — Breathe Battery Technologies — has developed and validated battery models capable of being implemented on today’s battery management hardware and for today’s lithium-ion cells. By adapting the charging processes to the unique, evolving health of every battery, significant hidden performance of a battery can be unlocked, contributing to progress towards several of the Faraday Battery Challenge (FBC) targets. The software could be capable of rapid roll-out to EVs already on the road (via over the air updates) following feasibility studies and trials in applications.

Breathe’s unique approach has the potential for huge near-term impact without the need to replace hardware on existing or new electric vehicles. We view this as a relatively inexpensive and easy to roll-out technological innovation poised to address some of the biggest challenges facing electric vehicles today. The company shows enormous promise and is competing for global leadership in battery management technology. In addition to vehicles, almost every application using lithium-ion batteries could benefit from the technology.”

Breathe has demonstrated that using a commercial cell with their battery management software can deliver:

The results unlock the potential for investment to scale up the company:

Breathe’s focus is on deploying its technology in the automotive, marine and aerospace industries to support transport electrification. The technologies being developed by Breathe are generating intellectual property in the UK. There is the potential for significant volumes of Breathe’s highly scalable software products, developed and validated in the UK, to be sold internationally. This represents a sizeable economic and job creation opportunity for the UK.

The Faraday Institution has sponsored an incubation programme for Breathe, which has helped the company to identify next steps, including filing their first patent and making various industrial contacts. One contact introduced by the Faraday Institution is now a partner on an Innovate UK grant that has subsequently been awarded, and another has been instrumental in helping Breathe’s leadership understand the market.

In the last 12 months the company has also garnered support from the European Regional Development Fund and CTO Dr Yan Zhao was awarded a Royal Academy of Engineering Enterprise Fellowship. Attracting talent has been instrumental in the company’s progress and, in addition to attracting full-time engineering talent from Porsche, Breathe has hosted several undergraduate interns from the Faraday Institution FUSE programme. In December 2021 Breathe announced it had completed a £1.5m fundraise led by Speedinvest – an early-stage venture capital firm – that will enable it to scale up and accelerate deployment of its technology in electric vehicles and consumer electronics.