With billions of lithium-ion batteries in circulation, safety is of paramount importance. While catastrophic Li-ion battery fires remain extremely rare, the vital work of safety expert Professor Paul Christensen is ensuring that first responders know how to tackle incidents correctly and, potentially, save lives.

Professor Christensen, the Professor of Pure and Applied Electrochemistry at Newcastle University and the leader of the university’s research as part of the Faraday Institution’s SafeBatt Project, advises fire services, local authorities and other government agencies on the risks posed by Li-ion batteries and what to do in the event of an emergency. He also works with automakers on developing fire sensing and extinguishing systems for their batteries. 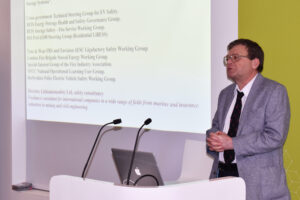 In 2020 he and his team were responsible for a major breakthrough, when they highlighted the previously unknown hazard of vapour cloud explosion from Li-ion batteries in thermal runaway. When overheated, crushed or overcharged, gases can be produced in Li-ion cells and in certain circumstances their temperature can increase very suddenly. This results in the venting of a vapour cloud that includes hydrogen, carbon monoxide, carbon dioxide and very small drops of the organic solvents used in the cells. First responders had previously mistaken these clouds for steam or smoke, but their composition means they create the potential for a vapour cloud explosion, which can be more damaging than the initial fire.

Since then, Professor Christensen has been delivering training and guidance to first responders around the world on how to deal with these vapour clouds safely. He has worked with 36 different fire and rescue services across the UK, training hundreds of fire fighters, as well as liaising with forces in Australia and New Zealand. His work in the Southern hemisphere has been led to an invitation to be part of 2022 Motorola Foundation-funded Knowledge Event Series lecture tour of Australia, New Zealand and Tasmania, organised by AFAC, the Australian fire and emergency services national council. This is taking place in October 2022.

He has been appointed the Senior Advisor to the National Fire Chiefs Council, sits on a number of UK Government steering and working groups on Li-ion safety and works as a guest instructor at the UK Fire Services College.

Rates of catastrophic failure in Li-ion batteries remain extremely low, with estimates suggesting that only one in 40 million suffers such a failure. But with an increasing range of use cases for Li-ion batteries, spanning electric vehicles, consumer electronics and second life applications, where existing batteries are re-conditioned and reused in new scenarios such as in the power grid, the potential for problems is increasing.

As well as protecting end users, better battery safety has economic benefits. Increasing the reliability of Li-ion battery systems could allow automakers to reduce the complexity of their systems, saving space, weight and costs. It could also cut the warranty burden on automakers, which is likely to rise to around £780m in the UK by 2030.

Led by Professor Paul Shearing of UCL, the Faraday Institution’s £1.5m SafeBatt project, which got underway in 2021, takes a broad look at the science of battery safety. Working with six academic and two industry partners, Professor Christensen says the project has three elements; studying sub-cell level events and the interplay between degradation and safety, and how cell failure propagates within a battery, as well as carrying out large-scale experiments on full size battery packs to observe how they behave under stress. The aim is to be able to understand these processes, which longer term will enable automakers to design and build more reliable battery packs. The SafeBatt project builds on the previous work of the Faraday Institution Degradation and ReLiB projects.

As part of SafeBatt, the Newcastle team recently spent time testing fire extinguishers that have been proposed for use with Li-ion batteries with the help of fire fighters from the Durham and Darlington Fire and Rescue Service. The extinguishers were deployed on Li-ion batteries of a size representing typical residential battery energy storage systems.

Now Professor Christensen is expanding his research to address how to tackle vapour clouds generated by Li-ion batteries that fail in indoor settings such as tunnels and car parks, as well as residential buildings. The growing popularity of e-bikes and e-scooters is a particular concern in this respect; 170,000 of the bikes were sold in the UK in 2020, a 70% year-on-year increase. The bikes are usually fitted with Li-ion batteries, and routinely kept and charged indoors by their owners, meaning a fire could have devastating consequences, particularly in shared accommodation in urban areas where access is limited. Professor Christensen is in the process of applying for funding from the Fire Service Research and Training trust, and plans to study the vapour clouds by conducting experiments in the full-sized buildings located at the Fire Service College.

Professor Christensen says: “The likelihood of an electric vehicle catching fire is very low, but currently we don’t have the data on ageing batteries from cars that have been in use for a while. And as we put more and more electric vehicles on the road, there are going to be crashes, and crashes that involve electric vehicles present very different challenges for first responders.

“We are the only team doing research of this kind of breadth, and it is really vital that stakeholders across the industry know how to use these batteries safely and what to do if things go pear-shaped. This becomes particularly important as we look at more second-life use cases for Li-ion batteries.

“This is the most important work I’ve done in my career to date and it’s great to feel I’m doing something valuable and making a difference.”