HARWELL, UK (1 March 2021) Scientists based at the University of Oxford as part of the Faraday Institution CATMAT project researching next-generation cathode materials have made a significant advance in understanding oxygen-redox processes involved in lithium-rich cathode materials. The paper, published in Nature Energy, proposes strategies that offer potential routes to increase the energy density of lithium-ion batteries.

“In the ever more difficult quest to make incremental improvements to Li-ion battery energy density, being able to harness the potential of oxygen-redox cathodes and the bigger improvements they offer relative to the nickel rich cathodes in commercial use today is potentially significant,” Prof Peter Bruce, University of Oxford and Chief Scientist of the Faraday Institution. “The deeper understanding of the fundamental mechanisms of oxygen-redox is an important step in informing strategies to mitigate the current limitations of such materials, bringing their potential commercial use a step closer to reality.”

“Finding pioneering solutions in the UK’s race to electrification needs large-scale, focused research effort targeted at industry relevant goals," Pam Thomas, Chief Executive of the Faraday Institution. "This is one example of Faraday Institution researchers achieving a significant scientific milestone, one that unlocks and accelerates multiple new avenues of research in the quest towards battery materials and that could increase the range of future electric vehicles. The breakthrough was facilitated by use of state-of-the-art facilities provided by Diamond Light Source and Royce Institute, demonstrating the importance of maintaining the strength of the UK’s research infrastructure.”

Increasing the range of electric vehicles demands battery materials that can store more charge at higher voltages in order to achieve a higher “energy density”. There are a limited number of ways to increase the energy density of lithium-ion cathode materials. Most current cathode materials are layered transition metal oxides incorporating, e.g. cobalt, nickel and manganese. One research route involves storing charge on the oxide ions as well as on the transition metal ions.

Use of such oxygen-redox materials to increase cathode energy density has been promising for some years, but realising their full potential in commercial batteries has been hampered by the structural changes they experience during their first charge, which are predominantly irreversible, and which give rise to a significant drop in the voltage available on subsequent discharge and future cycles.

A significant research effort has been underway for some time around the world to uncover a mechanism for oxygen-redox that explains these structural changes, but a clear understanding of the nature of oxidised oxygen remains a key part of the puzzle.

Techniques such as RIXS (resonant inelastic X-ray scattering) have been used with success in the past to probe the changes to the oxygen. But by collaborating with researchers at the state-of-the art, I21 beamline at Diamond Light Source, Faraday Institution researchers have successfully resolved these RIXS features that indicate that the oxidised oxygen species in the bulk of the material is molecular oxygen rather than peroxide or other species.

“Moreover, computational modelling has demonstrated that the evolution of molecular oxygen explains both the observed electrochemical response – the reduction in voltage on first discharge – and the observed structural changes – explained by the accommodation of the molecular oxygen within the bulk of the material,” said Prof Saiful Islam, University of Bath and CATMAT Principal Investigator. “This single unified model tying molecular oxygen and voltage loss together allows researchers to propose practical strategies for avoiding oxygen-redox-induced instability, offering potential routes towards more reversible high energy density Li-ion cathodes.”

Six such strategies are proposed in the paper, of varying novelty, all of which are promising and are being explored by the CATMAT project. The mechanistic understanding developed will speed up research in each of these areas, offering an alternative to iterative, trial and error approaches. In one novel research direction, researchers are investigating the development of a unique “superstructure” where control is exerted over the ordering of lithium atoms in the transition metal layer, giving more stability to the structure and reducing voltage loss. 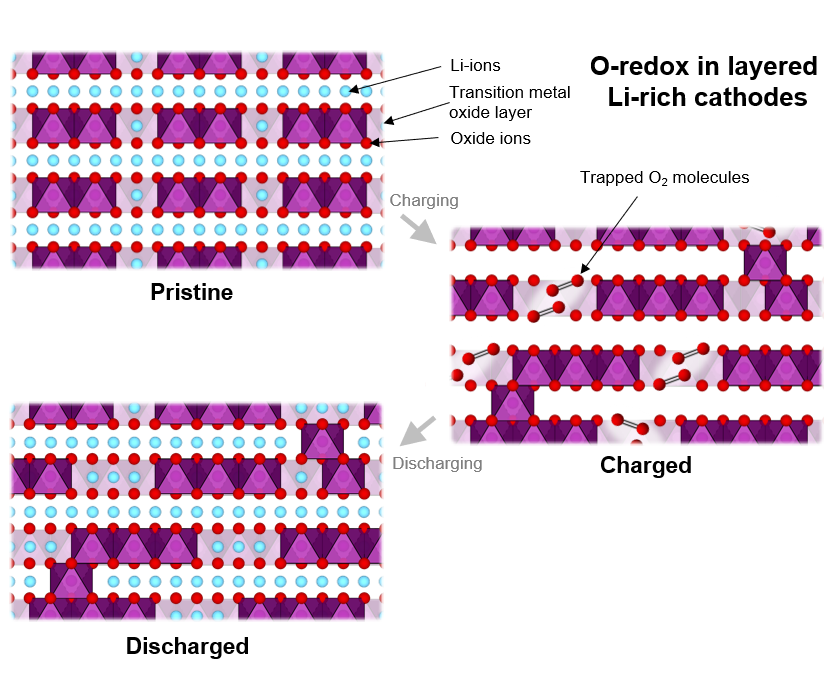 The structure of a Li-rich cathode in a pristine, charged and discharged state showing how molecular O2 takes part in the energy storage mechanism of an O-redox material.